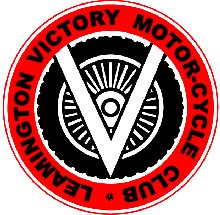 Founded in the Autum of 1945, local enthusiasts were keen to revive motorcycle competition that had been absent after six long years of war. Some of the founder members had belonged to the pre-war Leamington and District MCC, but this was to be a new club and in those heady days a new name was chosen.

Within a few months a regular series of competitive and social events was well underway. Meetings were held in various Leamington pub rooms starting at "The Fox and Vivian"and later more regularly at the "Windmill Inn" in Tachbrook Road.

Whilst the early events were all Trials, a strong nucleus of Grass Track supporters soon had plans for meetings in the local area. Amongst the venues used for Grass Tracks in the first few years were Victoria Park in Leamington and Abbey Fields in Kenilworth, both run in aid of charity.

The club continued a strong sporting calendar through the 1950s with up to ten trials and at least two race meetings every year. In 1960 the Club was able to purchase its own premises at Bishops Tachbrook and this became the focus of the social side of the club.

With running costs escalating it was decided to sell the club house in 1987 and look for our own piece of land to run events. In 2004 we puchased our 23 acre field at Ashorne near Warwick which has already been the venue for many sucessful events.

Throughout our 60+ years the club has had strong links with Wood Farm at Ufton, Warwickshire. With very few exceptions we have run our "Boxing Day Trial" on Ufton Hill every December and our regular location for Grass Tracks for many years. Our grateful thanks go to landowner and club President Mr. Derek Hiatt for his continuing support.